When Chris mentioned that there was an animal out there called Toky0-X that is genetically engineered to be the tastiest animal out there, we knew we had to try it. Tokyo-X is a real, legit animal. It was created by cross-breeding Durok (US), Berkshire (UK), and Beijing Black (China) pigs together. It took seven years for them to develop this delicious animal. Tokyo-X has marbled meat, which is extremely rare in pork. It has 5% inter-muscle fat and costs twice as much as normal pork. Tokyo-X is to pigs as Wagyu is to cows.

At first, we were going to try to find Tokyo-X in Japan, but then Chris found a place in LA that served it, in Koreatown. Park’s BBQ. (955 S Vermont Ave)

Chris, Erin, Dave, Jules, Eliot, Strom, and I ventured into Koreatown to a nice BBQ spot. Each of the long tables had two grills. We ordered a few things, but were most excited about our Tokyo-X pork belly. They brought us a ton of sides and sauces, too. It was amazing. I’d like more of my food to be genetically engineered. Eliot, the vegetarian in our group, even tried it, but was oddly not impressed. Everyone else loved it, though. 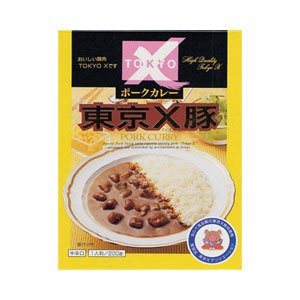 Edit: we found some Tokyo-X curry. Does anyone know where to find this, in either Los Angeles or Japan?